Launched in March 2021, this 2D mobile game was made in a group of 2 using C#, Unity and Visual Studios. The player controls a spaceship which constantly accelerates in the direction it is facing and can be rotates left and right. The aim of the game is to fly as far though space as possible without running out of fuel which is constantly drained. Fuel is also lost when the player collides with a planet, but can be gained by collecting fuel cannisters which are floating around space. Once out of fuel, the player dies and then starts a new attempt. On the way, the player can pick powerups such as a shield, magnet and speed boost, and they can also collect stars.

Stars are a currency which can be used in between rounds to buy new ships. Each ship, other than the starter one, has a unique ability such as drilling though a planet, travelling back though time or creating a black hole. Stars can also be used to upgrade 5 statistics on the ship: turn speed, ability cooldown, speed, armour and fuel capacity.

On this project, I programmed: the player movement, procedural generation, all player abilities, powerups, custom physics for the planets and player (Not using any of Unity’s inbuilt colliders and physics engine) and a post processing shader which adds lighting. I also created all of the art except for some of the UI.

This multiplayer game was made over 13 weeks in Unity with C#. Players can create and join lobbies in a custom matchmaking system. The owner of each lobby can start the game at any time. The players will then sort themselves into teams and vote on a map to play.

The players then fight in a series of rounds to the death. The first team to win 5 rounds wins. There are 3 characters to choose from who each have 4 different abilities to fight with. The game is controlled with click to move similar to MOBA’s and many RTS games.

For my major project in my degree, I created a foveated renderer which uses dynamic eccentricity layers to approximate more accurately the human eye’s drop-off in acuity. This was created using C# and Unity, and was accompanied by a 6000 word academic research paper which received a 1st.

The foveated renderer works by tracking where the user is looking on the screen and then only rendering a small area around that in high resolution, with a lower resolution used for the rest of the screen. This means that far less pixels are rendered every frame, without the user being able to notice the difference, reducing render times by a huger percentage, allowing a computer to run far more intensive graphics than it should be able to.

This graphics engine was made with C++ and openGL. A demo was made from the engine which features a series of shaders including: one which makes fish swim; a water shader which the player can interact with by making ripple; a portal shader; and a voronoi shader. 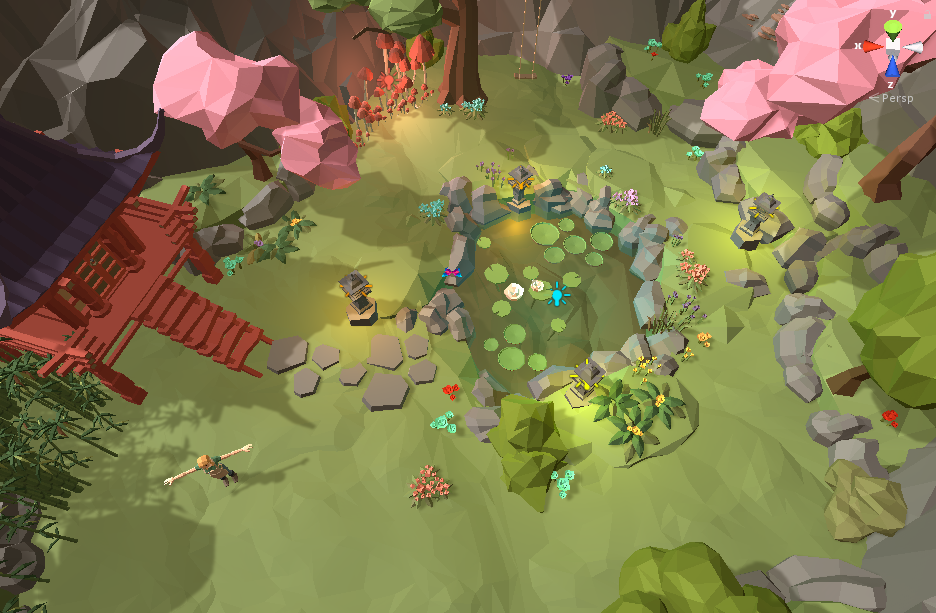 Journey To The Edge

This game was made in a 2 man team in Unity with C#. The player controls a wizard with click to move. They have a selection of abilities which they can equip 4 of at one time and will use to fight. The aim of the game is to reach and kill a final boss who lives at the other side of the map. To get there the player must fight their way through a series of zones, facing increasingly difficult enemies. When killed, enemies drop items, gold and experience which can be used to level up abilities. Along the way the player can talk to NPCs, find loot, buy items with gold, activate shrines to save progress and complete side quests for additional gold. 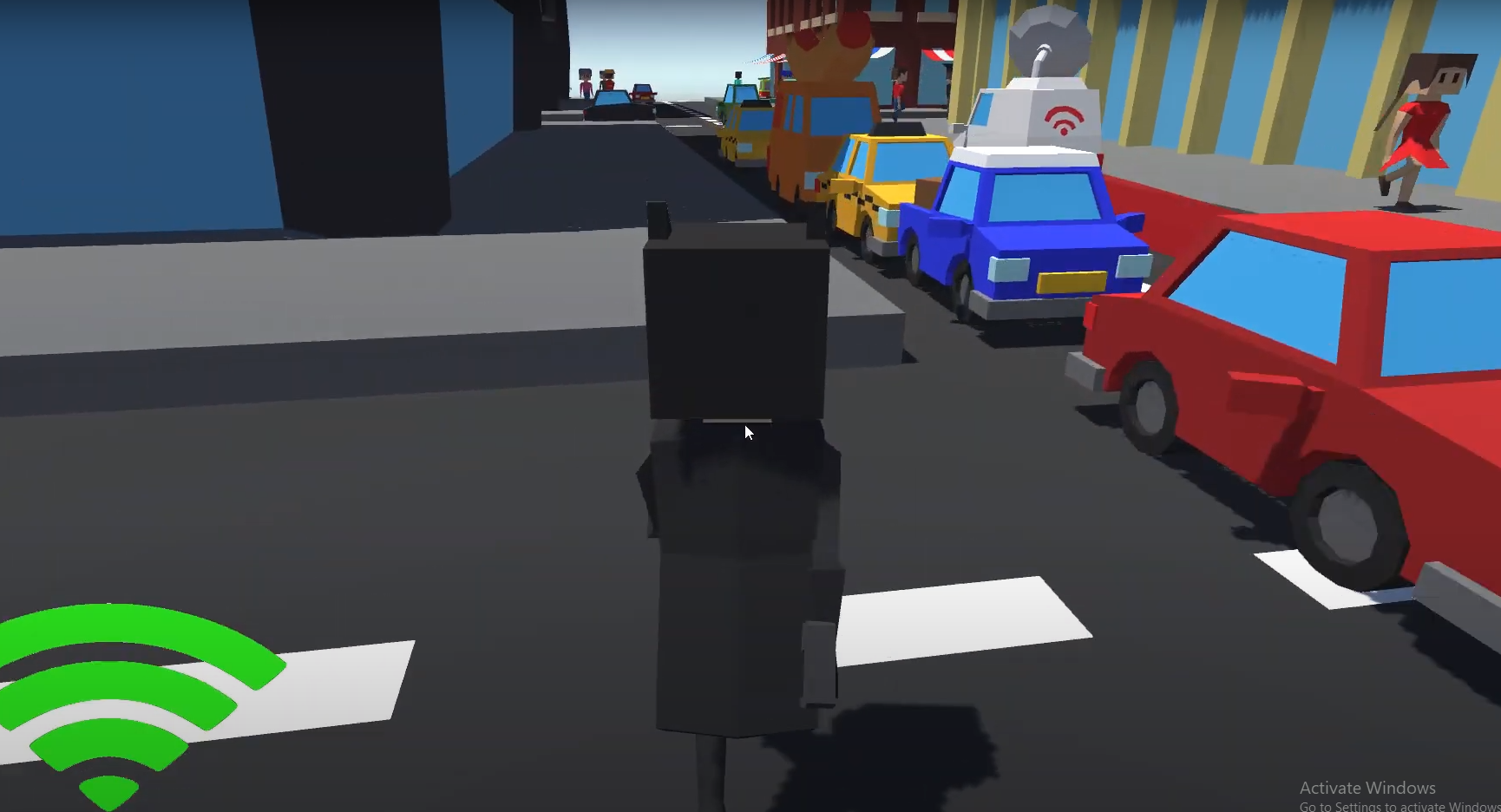 This game was made in a team of 3 people over 3 days for Ludum Dare 46, using Unity and C#. The theme for this game jam was “Keep It Alive”. In this game the player has a phone and is using a free WiFi signal, from a van, in order to download something. The player needs 2 more minutes to complete the download but the van is driving away. The player must run after the van and stay within a certain distance of it for 2 minutes to win. The van will drive though an infinite, procedural city filled with cars and civilians. If the player hits a car they will be sent flying into the air and will loose speed so they must avoid them.

This game was made in three days, for the 2019 EGX Student Game Jam, using Unity and C#, in a group of 6 people. Two players are given shopping orders at the top of the screen. They must collect the items in an order, place them in a basket and then deliver them to the register. There are guards patrolling the shopping centre who will chase the players, when they spot them, until they either catch them, knock them out, or loose vision of them for a period of time. 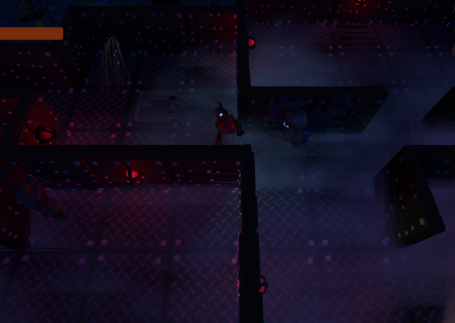 This game was made in 48 hours, for the 2019 Global Game Jam, using Unity and C#, in a group of 4 people. The theme for this game jam was “Repair”. The player controls a robot who is in a steampunk submarine. Holes will appear in the side of the submarine which the player must repair. If the holes are left open for too long then squid monsters will climb through the holes and attack the player. The player has a fuel resource which they use up when repairing, loose when they are attacked, and may refill at a fuel dump in the centre of the submarine. The game ends when the player runs out of fuel.

This game was made in 48 hours in a 2 man team, using unity. In this 2D puzzle platformer, the player is faced with a series of levels. In each level the player can move around with WASD, fire a gun to destroy objects and use a grappling hook. The player must manipulate their environment by pushing and destroying objects to get a spherical bomb to a final location without it exploding.

A Wolf In Sheep’s Clothing

This game was made in a 3 man team for the Yogscast’s Jingle Jam, using C# and Unity. In this top down game the player has to explore some woodlands and find their sheep. They can leash the sheep and then take them back to their pen, however each sheep they are pulling reduces their speed. One of the sheep is actually a wolf in disguise and will reveal himself when the player gets to close. When revealed, the wolf will chase and eat the sheep and the player.

Please don’t hesitate to get in touch.